Ebola and The Wizard of Oz

Thereâ€™s so much fear and negativity concerning Ebola that I think itâ€™s time we identify and seize the good in this turn of events. If there were any remaining doubts that the federal government is corrupted and collapsed, itâ€™s beyond question given its shameful response to handling Ebola in the U.S. Remaining doubts can now be buried once and for all. So where does that leave us and how can there possibly be good in the arrival and potential spreading of a pandemic? It leaves us exactly where we need be to restore this Nation to the greatness that is its potential. 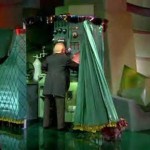 Its leaves us local.

No competent governance or viable solutions can be forthcoming from a corrupted, collapsed and bloated federal system. The federal governmentâ€™s negligence in its response to Hurricane Katrina was the warning bell that many people heard. Too many, however, missed the calling. It was a regional problem and FEMAâ€™s incompetence and misguidance posed no national threat so many chalked it up to a transient error and moved on. Not so with Ebola and the CDC.

The CDCâ€™s criminal negligence in allowing a nurse who treated the Dallas man who died of the disease, to board a flight knowing she had a fever and thereby put 127 people at risk is inexcusable and actionable. The expenditures by the CDC over the past few years of public funds allocated to the CDC to study and prevent disease have been criminally negligent. Studies of monkey poop, innovative condoms and national bike trails not to mention â€œmood roomsâ€ and flat screen televisions took fiscal precedent over laboratory needs and pandemic preparedness.

Any and all actions that will begin to turn the country around, provide safety and preserve individual liberties must now come first from ourselves, then from our communities, and finally from the States. This is the good news. Ebolaâ€™s arrival, and the subsequent failure of the federal government to act competently or responsibly in response, is like the moment in The Wizard of Oz when Toto pulls back the curtain to reveal the great and powerful Oz as nothing more than the deceptive illusion of mechanical bells and whistles operated by an all too fallible human.

The federal government has been broken for quite some time. Long before Barack Obama took office. He too, has been a giftâ€¦for his total inability to lead and govern has made it possible for the curtain to finally reveal the deception and the illusion. He is the Wizard and his Administrationâ€™s bells and whistles are out of steam.

So, now itâ€™s up to usâ€¦you and me. Itâ€™s our turn, and our time, to reject the politics of deception and division and take back personal responsibility for our lives. To gather in our resources at the most local levels and organize realistic, effective and positive solutions to immediate concerns. Itâ€™s time to demand of our Governors that they take full responsibility for their stateâ€™s well-being by bypassing the constraints, and intimidation, of the federal government and do what is necessary to protect and defend the safety of their citizens.

If we are finally ready to do the heavy lifting, we can turn the fear of Ebola into the blessing of Ebola, and, like Dorothy, leave the illusion behind and go home to all that is good and realâ€¦and true.